Wat Arun: temple of the Dawn in Bangkok

Wat Arun in Bangkok — information, photos, videos, ticket price, how to get, address, coordinates and placemark on the map.

Wat Arun (temple of the Dawn) was built in the Khmer style on the banks of the Chao Phraya river during the reign of the General Thaksin, who declared himself king of Thailand. Under king Thaksin, this was the main temple of all Siam — it was in it that the sacred emerald Buddha was temporarily placed just after its reconquest from the Laotians (it now occupies its proper place in the temple of Phra Kheo, built specifically for this relic). 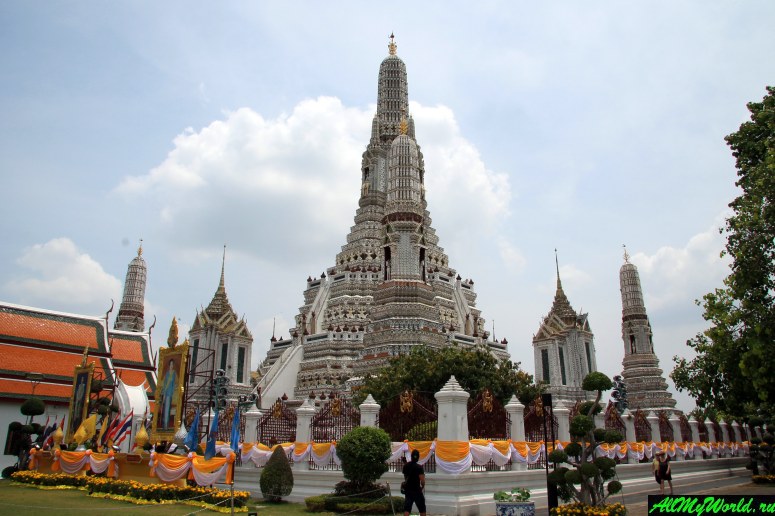 Wat Arun was named after the Hindu God of the morning dawn (Arun) and looks very similar to the ancient temples of originally Hindu Angkor. The temple is not very ancient: it was built in the XVII century, and the side stupas-prangs were added in the early XIX century on the instructions of king Rama II. But not being the oldest one, it is undoubtedly one of the most beautiful temples not only in Bangkok, but in all Thailand: 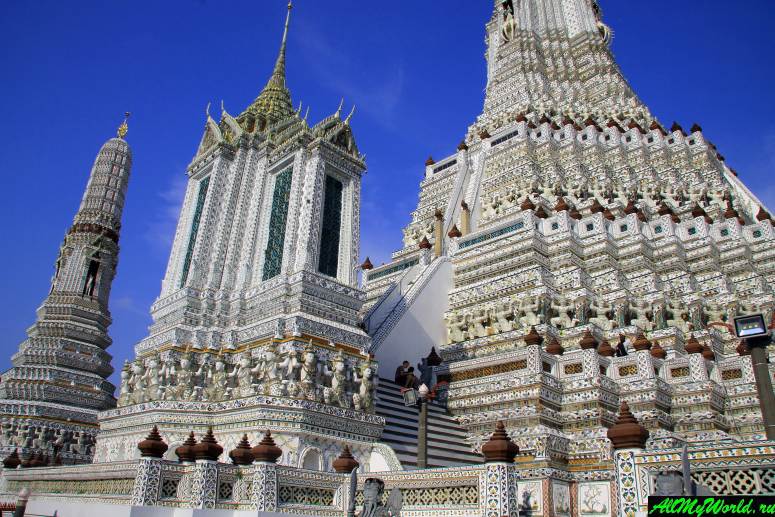 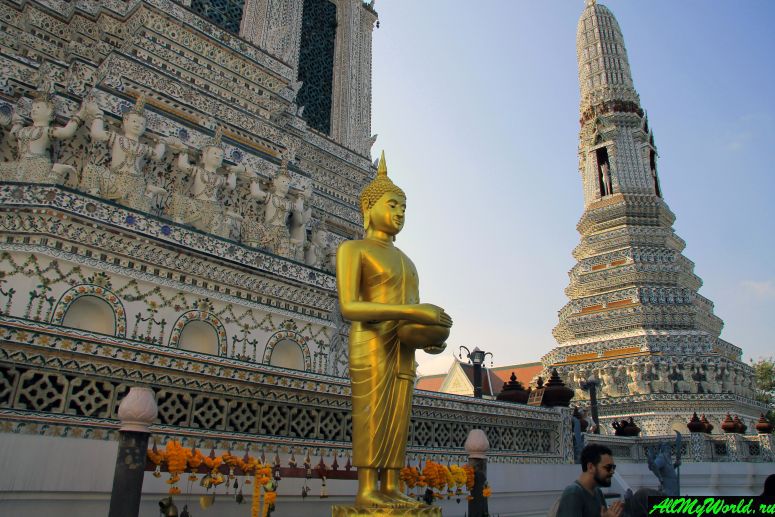 Compared to the other two main shrines of the Bangkok center (Wat Phra Kheo and Wat Po), the temple of the Dawn looks very unusual: 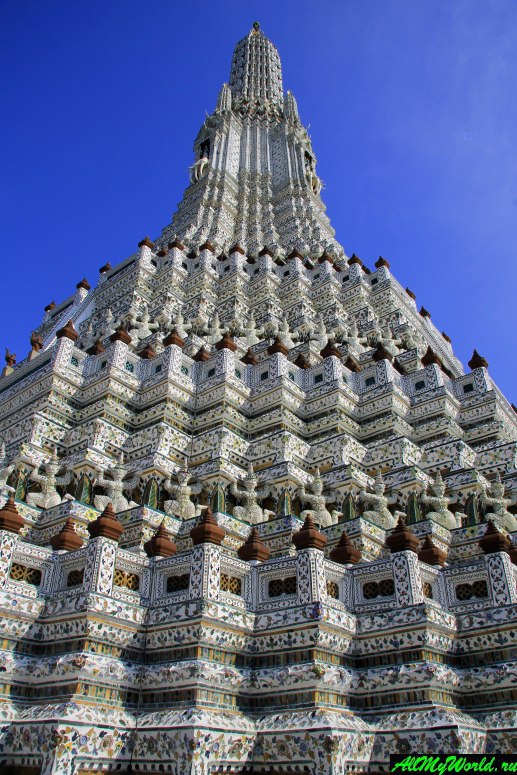 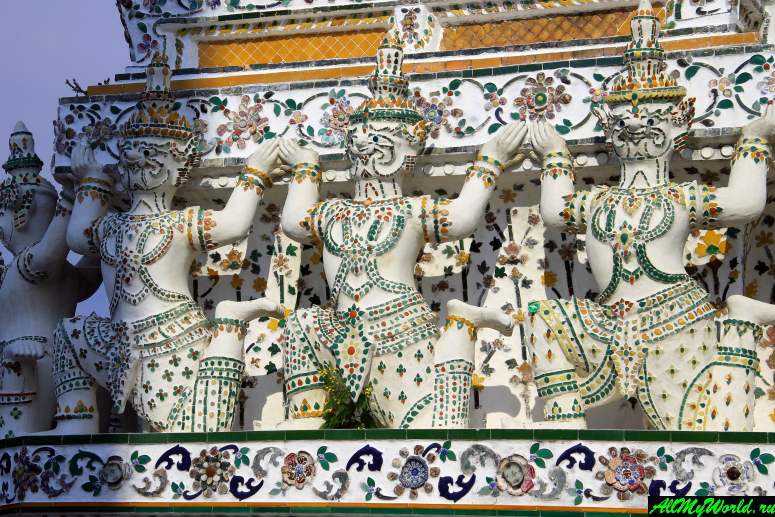 The temple owes its appearance to king Mongkut or, rather, to one of his creative associates. They decided to ornate the temple with pieces of broken multihued Chinese porcelain, which had previously been used on merchant ships as ballast. This is how ordinary porcelain found a second life on the walls of one of the most beautiful temples in all of Southeast Asia. Porcelain looks very impressive in the rays of the setting sun — a large number of tourists come in the evenings on boats and ferries to admire it. 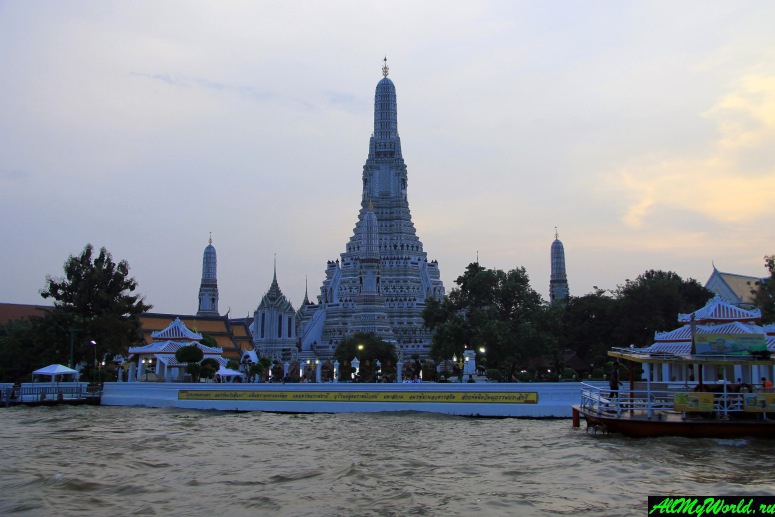 The central 82-meter prang (tower) of the temple represents Meru (the sacred mount for Buddhists), and the tiers represent the cosmogonic structure of the universe and the multiplicity of worlds. In the niches of the main prang are statues of the god Indra on the sacred elephant Erawan, and four small prangs surrounding the main stupa are the «habitations» of the gods of the Moon. 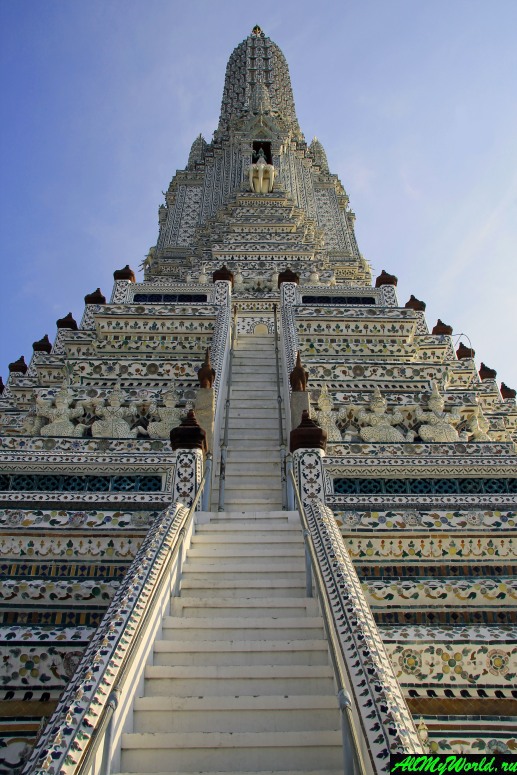 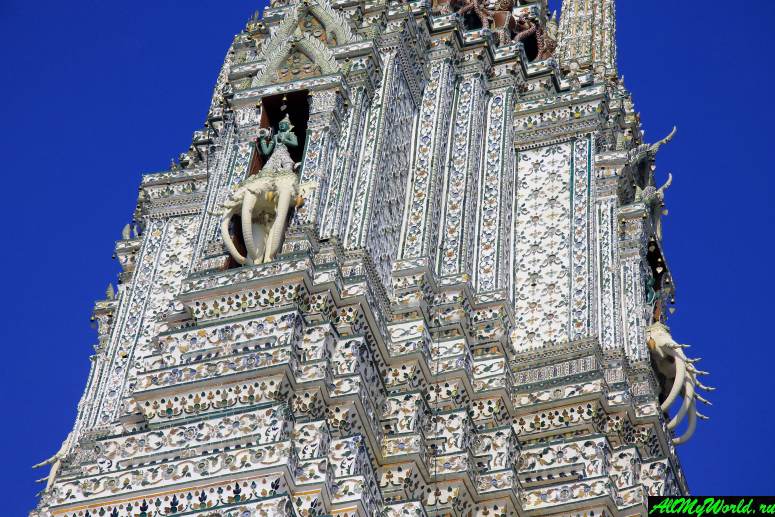 On the territory of the temple there are many stone statues of sages, mythical warriors, animals, as well as many flowers. 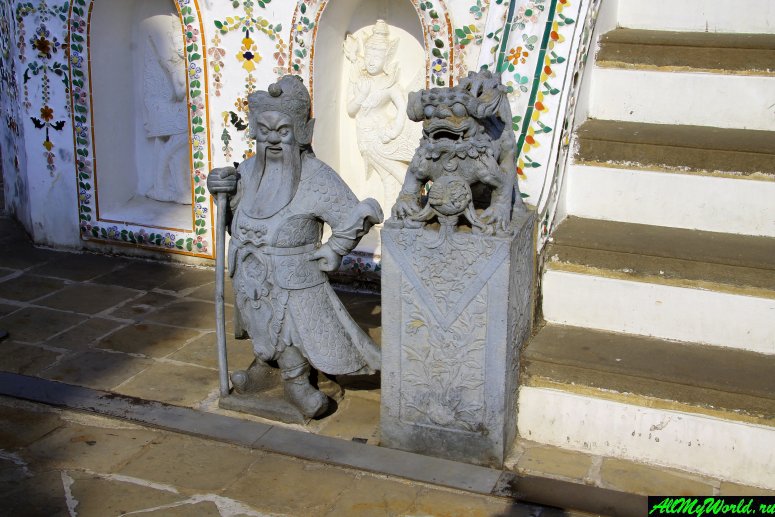 The interior of a bot (a temple building designed for prayers and services) also worth an inspection: according to legend, the main Buddha image was made by Rama II himself (the king’s ashes are interred in the base of the Buddha image). Most of the frescoes date back to the reign of Rama V and one of them is especially interesting: that depicts Prince Siddhartha and his encounters with images of birth, old age, illness and death – the experience that led him to abandon the worldly life. 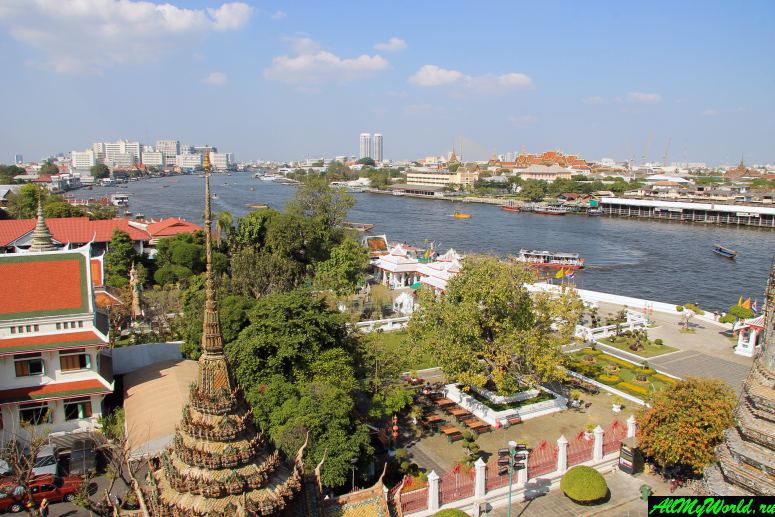 Photos and videos of Wat Arun: 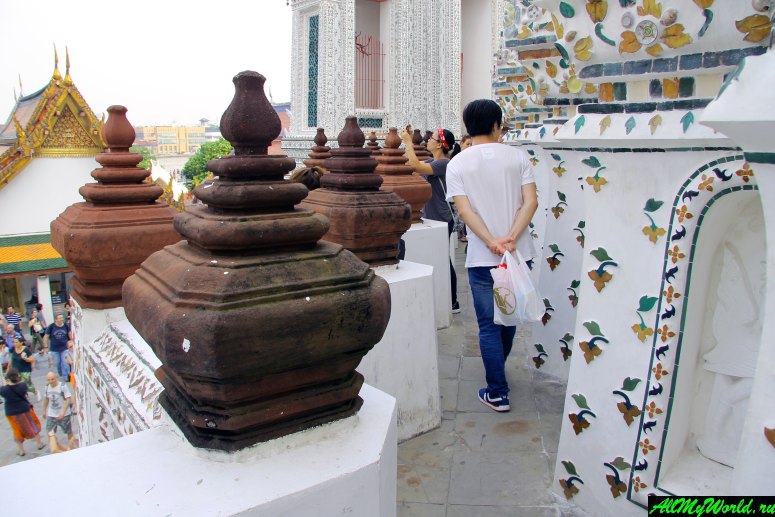 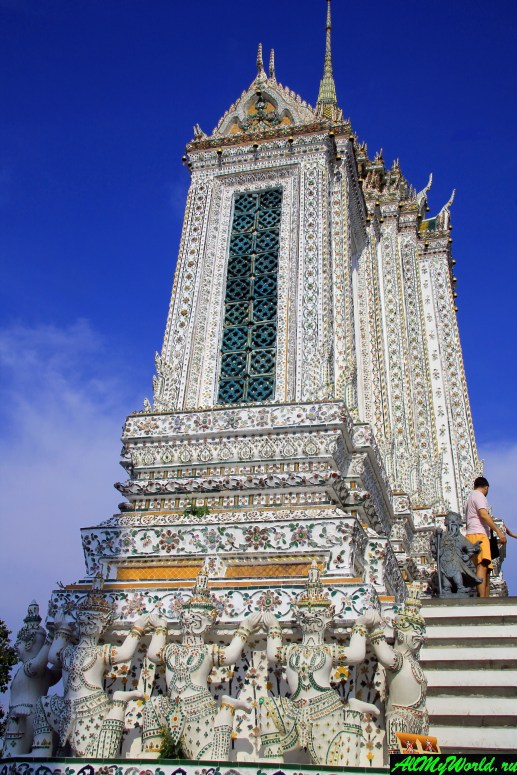 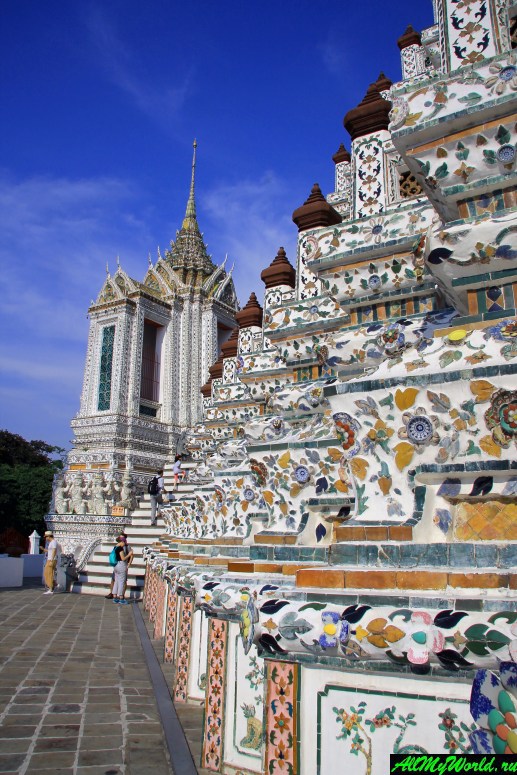 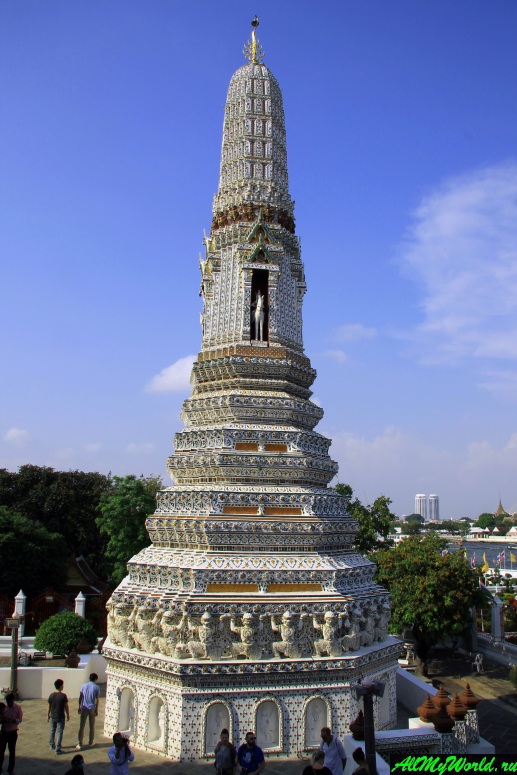 Two small videos of the temple:

How to get to Wat Arun

Wat Arun is located on the bank of the Chao Phraya river just opposite from the Grand Palace. From the pier near the palace (Tha Thien), you can cross the river by ferry for 4 baht. In addition, the Chao Praya Tourist boat which runs along the river from Phra Arthit pier in the north to Central Pier in the south, stops directly at the pier near Wat Arun, so you can use it to get directly to the temple from most piers located on the east bank of the river.

Wat Arun on the map of Bangkok:

Opening hours: 8:00 — 18:00. The entrance ticket costs 50 baht. Dress code: it’s not allowed to enter the temple territory with bare shoulders and in shorts. 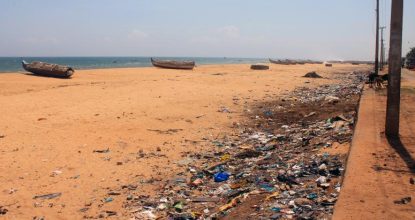